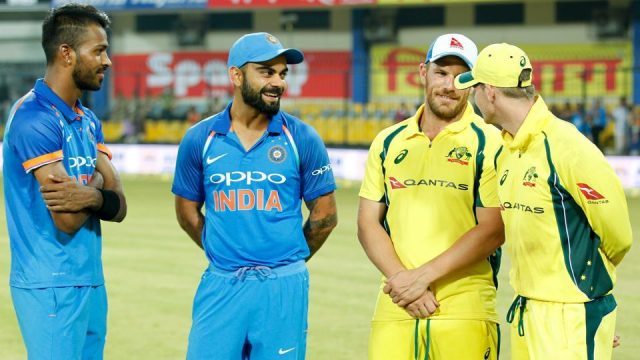 India vs Australia, 2nd ODI Preview– Indian Skipper Virat Kohli is set to be back at his regular number three position after the strategy of coming two-down boomeranged in the lung-opener as India take on a resolute Australia in the must-win second ODI here on Friday.

India go into the game 0-1 down after Australia registered a 10-wicket win in the lung-opener at Mumbai, courtesy David Warner and Aaron Finch, who hit unbeaten hundreds.

In a bid to field all three in-form players — Rohit Sharma, Shikhar Dhawan, and KL Rahul — Kohli dropped himself down the order but the plan backfired spectacularly as he was unable to convert his start.

On the other hand, a high on confidence Australia will be looking to seal the issue to register back to back series wins in India, a rare feat for any visiting team. The Finch-Warner combination will look forward to carry the momentum.

If all of them fire in unison, along with the openers, then it will hard for the opposition bowlers.

However, it will be quite a test of their middle-order at the Saurashtra Cricket Association stadium.

Australian bowlers also showed at the Wankhede, why they are considered among the best.

Spinners Adam Zampa and Ashton Agar, not only contained the runs, but provided crucial breakthroughs and are expected to play a similar role again in the middle overs.

The track here is expected to be a belter and India can draw confidence from the home series against New Zealand in 2017, when they won 2-1 after losing the opener, co-incidentally in Mumbai.

Latest update on Travel, Events, Lifestyle, Food, Festivals, Technology, Auto and Tourist places to visit in India and around the world at TheBlogRill.com
ALL POSTS
PrevPreviousVijay sethupathi birthday; Gives His Fans An Advance Birthday Treat
NextIndia vs Australia: India Predicted XI for 2nd ODI – With series on the line, Kohli set to make big changes in RajkotNext